The second dispensation of Bible history is commonly called the “Mosaic Period.” An understanding of this period is important for it is the history of the fulfillment of God’s promises to Abraham-that through Abraham’s seed God would bless all families of the earth (Gen. 12:1-3). We are informed how God developed and dealt with the family out of which the Savior of the world was born.

I. Significant Facts Of The Mosaic Dispensation:

A. Name-This period is named after Moses, for it was through him God delivered the law to the Jews.

1. This age begins with the giving of the Ten Commandments at Mt. Sinai and lasts until the death of Christ, a span of about 1500 years.

2. The Bible record of this period may be read from Exodus 20 through Acts 1.

1. Abraham had been promised a great nation and land (Gen. 12:1-2). Jacob, Abraham’s grandson, whose name was changed to Israel, fathered twelve sons, known as the twelve Patriarchs. The descendants of these sons became known as the twelve tribes of Israel.

2. The twelve tribes of Israel formed the nation of Israel. Through Joseph, the great-grandson of Abraham, the Israelites spent 215 years in Egypt (Read Gen. 12-50). When God was ready to lead this nation to the promised land, He chose Moses to be His spokesman (Read Ex. 1-20). This occurred 430 years from the time of the original promise to Abraham (Gal. 3:16-17).

1. Many interesting and profitable stories are contained in this period. Valuable lessons can be gleaned from the lives of Moses, Joshua, Samson, Samuel, Saul, David, Solomon, Elijah, Elisha, and many others (Rom. 15:4; Heb. 11:32).

2. As we survey this period, however, keep in mind the underlying thread which ties it to the rest of the Bible-God is preparing the world for Christ.

3. We can best analyze the significance of this period in relationship to Christ by studying about the law of Moses.

2. These commandments, written on tables of stone, were important; however, we must remember that the Law of Moses included many other laws pertaining to their worship and government. The complete total of all commandments which were delivered through Moses, both religious and civil, are referred to as “the law of Moses” (Acts 13:38-39). The Law of Moses is the same as the Law of the Lord (2 Chron. 34:14; Luke 2:22-24).

1. Worship revealed by this law consisted of animal sacrifices and observance of various days, weeks, months, and years.

1. Every year sacrifices had to be made again because sins were remembered, Heb. 10:14.

6. Actually the New Testament contains every one of the ten commandments with the exception of “Remember the Sabbath Day.” Christians worship on the first day of the week (the Lord’s Day), Acts 20:7; Rev. 1:10.

2. Those who justify their religion by the law are fallen from grace, Gal. 5:2-4.

a. We do believe and study the Old Testament, for it teaches the nature of God, the sureness of His word, and of His exceeding love for us, Rom. 15:4. 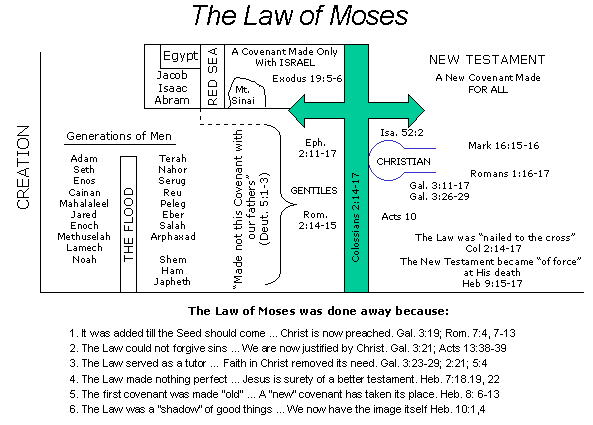 1. Under the leadership of Joshua the Israelites gained the land promised to Abraham, Gen. 12:1.

2. Israel reached its greatest strength during this period, 1 Kings 10:1-7.

2. The Northern Kingdom (Israel) was taken captive by Assyrians in 721 B.C.

3. The Southern Kingdom (Judah) was overthrown by Babylonians in 606 B.C.

1. During the decline of the nation, the captivity, and the return to Jerusalem God spoke through the prophets.

2. Their mission was to try to save the nation from its idolatry and wickedness; failing in this, they announced the nation’s destruction. However, they foretold that a remnant would be spared.

3. Out of this remnant would come the Promised Seed of Abraham (Christ), who would bring all nations to God.

1. The first remnant of Israelites was led back to Jerusalem under the guidance of Zerubbabel who started them rebuilding the temple in 536 B.C.

2. The second remnant was led by Ezra, who helped to reorganize and re-establish the nation, in 457 B.C.

3. The third remnant was led by Nehemiah who directed the rebuilding of the wall about the city of Jerusalem in 444 B.C.